We have a lot of updating to do. But right now I’m inspired to write about my trip last week. I used my PD money from school (and some of my own) to go to Learning2 in Addis Ababa, Ethiopia. As I wrote about on my professional blog, it still seems surreal!

Since direct flights only go to Addis Ababa every couple of days, I arrived EARLY Wednesday morning (about 30 hours before the conference officially started). I ended up being the only non-Ethiopian on the flight that was staying in the country (a lot of Ethiopian women work in Kuwait). I was a little surprised at how small the airport was…until I realized that we flew into the domestic terminal! An Italian pilot for Ethiopian Airlines helped me find the shuttle for my hotel and thus began my trip of helpful & kind people!

I shared the shuttle with two women (one from Boston, the other from Quebec) who were in Addis for a UN conference on human rights. We ended up chatting, seeing each other around the hotel and taking a 15-minute excursion in a taxi to the souvenir area of the city on Thursday. We didn’t buy anything but it was totally worth it. Traveling alone is something I haven’t done in many years but I was able to step outside my comfort zone and meet lots of amazing people!

Shortly after arriving to my hotel on Wednesday, I realized that I had booked at the WRONG hotel! There are two Jupiter International Hotels in Addis…the only difference is the location. The rest of the people at my conference were staying at the other one. Wednesday was also the epic day that I lost my voice for the first time in my entire life. Laughing at my luck and staying positive were what kept me going during my stay in Ethiopia! There were no available rooms at the correct hotel, so I jumped in a taxi to go hangout at the school. It was incredibly interesting to talk to the taxi driver – he spoke pretty good English and we talked about Ethiopia, traveling, open-mindedness and perspective on the world. It would be the first of many great conversations while in Addis.

Thursday morning started a little later than I would have liked…but I got to switch hotels! When I woke up there was one hotel room left at the correct hotel. However the internet was out at my hotel and I needed to call Agoda so that they would approve a switch to the other hotel. It was my initiation into Africa – unreliable internet and power. When I was checking in at the correct hotel I realized that I had left my passport in the safebox in my room at the first hotel! But I got it all worked out with the help of the great staff at the hotel. That left me time to explore the city a little (see above) and make it on the 11am bus to the school. That put me at school just in time to have lunch! ICS’s cafeteria is awesome – super cheap, super yummy Ethiopian food! I had the Tegamino Shiro. 20 birr = $1. And I couldn’t eat it all! 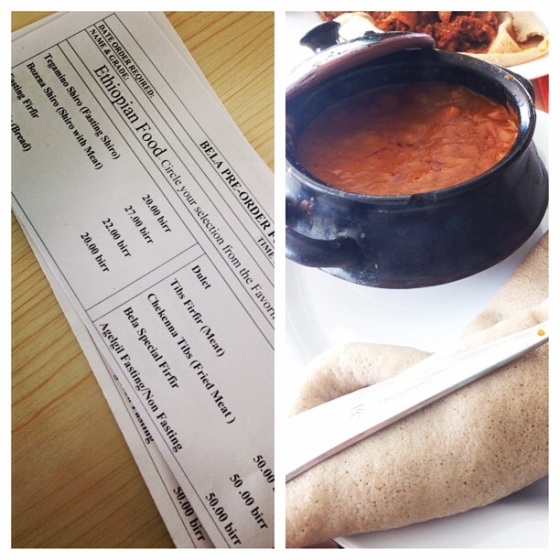 Because I was at the conference early, I got to meet and hangout with people that I’ve been communicating with for years on Twitter and through blogs. One of my favorite parts of the conference was that it was all inclusive (a surprise!). The only meal I paid for was the one above. And I never had to pay for drinks (they flowed freely every night!). Best $400 I’ve ever spent!

The conference was intense – pick up at 7am and back to the hotels around 9pm. It was like no conference I’ve ever been to before and I’d go back to every single one in the future (they also have them in Asia and they’re coming soon to Europe & the Middle East…and Mars?). The conference is build around the concept of being social and it didn’t disappoint.

Since we didn’t have any time to explore the city, the conference organizers brought Ethiopia to us. There were traditional dancers at the opening session and we had dinner at an Ethiopian restaurant on Friday. There were also vendors at the school on Friday & Saturday and I made sure they got my money ;). I bought an Ethiopian opal for a friend (did you know that they’re famous for opals?! AND they’re so different!), a painting for us and a couple other small gifts. Unfortunately I didn’t buy any coffee on Friday and they didn’t come back on Saturday. So the owner of the art gallery let me “borrow” his driver and we went to Tomoca to stock up on coffee. I made it back to the school alive! 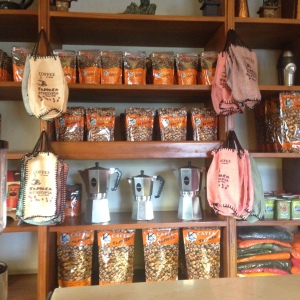 The collaboration was inspiring, the school was beautiful and the RAIN was divine! The cool weather was a beautiful break from Kuwait. I even got to speak some French! I met teachers from la Cote d’Ivoire at the conference and some people from the Congo in line at the airport. I can’t wait to go back to Ethiopia to explore with Jeff (and Abby?). My only regret – I was in where coffee originated and I don’t like it!

Check out all my pictures from Ethiopia (all taken with my iPhone)!